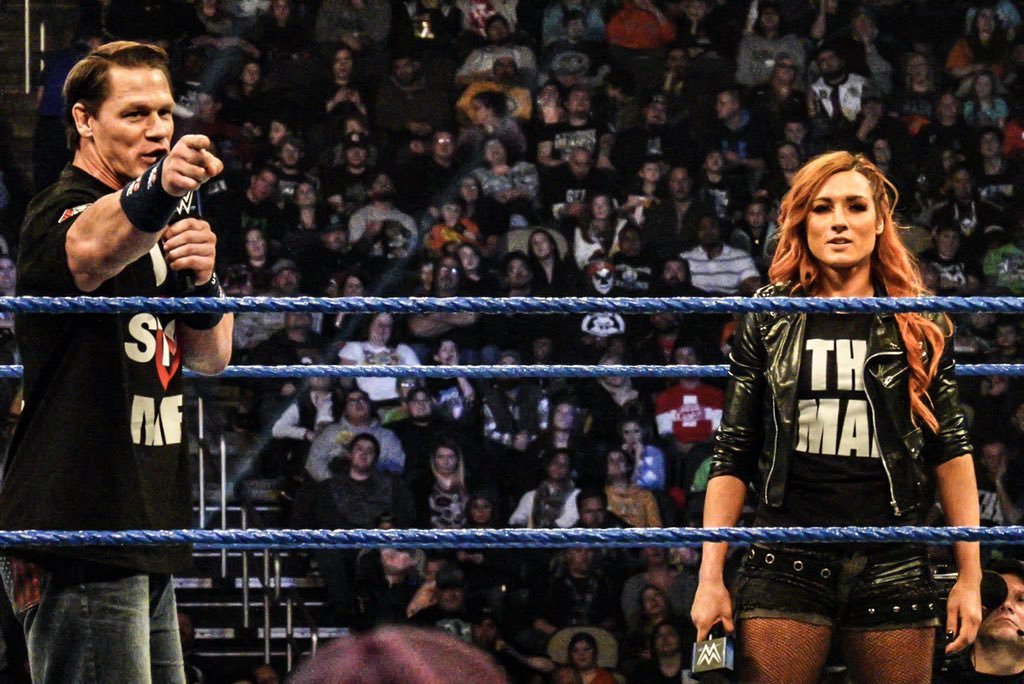 As noted, this week's New Year's edition of WWE SmackDown will feature a big mixed tag team match with John Cena and Becky Lynch taking on Andrade "Cien" Almas and Zelina Vega. The match, taped at Saturday's SmackDown tapings in Pittsburgh, was made after Becky interrupted an in-ring promo from Cena.

One line from Becky already has the internet talking. After telling Cena she will take his face off the WWE posters like she did with Charlotte Flair, The Man referenced Cena's break-up with Nikki Bella.

Lynch said, "And if you have a problem with that, Nikki Bella won't be the only woman that's dropped you this year."

Cena's promo included a line about how he was looking for a SmackDown Superstar to give him a reason to be on the blue brand show that night. Lynch later asked, "How does it feel to know you were looking for a man to step-up instead of The Man?"

The tension between Cena and Lynch continued during the match as she slapped him on the chest at one point to tag him in. The finish saw Cena on his way to getting the pin on Almas but Lynch interfered, tossed Cena out of the ring, and then made Vega tap out. Cena tried to shake hands with Lynch after the match but Lynch responded with the "you can't see me" taunt in his face.

Below are a few fan photos and videos from the segment & match, which will air on tomorrow's SmackDown broadcast:

Cena has gone from a bumblebee to a birdbox monster to the next person in the mans firing line????????

Becky must not be a fan of Cena's hair ????
pic.twitter.com/w5mPwvUmaU

Becky wants Cena to clearly understand that they are not friends lol... pic.twitter.com/3XvFLzDVBX

Becky even tagged Cena in with a hard slap to his chest. Went face to face with Almas. The Man will take on anyone ???? pic.twitter.com/fc4GdlXves

After Cena hits a flurry and finished with his AA and his new punch on Almas, Becky throws Cena out of the ring, beats Zelina and does a "you can't see me" when Cena wants a make up handshake.

"How does it feel to know you were looking for a man to step up instead of the man?

And if you have a problem Nikki Bella won't be the only person to drop you this year" - Ms. Chimney pic.twitter.com/XOfJBlyKQ1

Very nice to see this guy back???? #SDLive pic.twitter.com/dbbVl1nmdv

Previous Article
Green Power Ranger To Make Pro Wrestling Debut In 2019
Next Article
WWE Superstar Apparently Calls Out Nia Jax, Tells Her To Focus On Her Craft Instead Of Social Media