- WWE posted this video looking at the best moments from the Mixed Match Challenge season two finals at WWE TLC, which saw Carmella and R-Truth defeat Alicia Fox and Jinder Mahal to win the competition.

Raw and SmackDown LIVE both made a strong showing on the "Tops of 2018: Social TV" list released by Nielsen Friday morning. The list ranks the most social series on television this year across Facebook and Twitter.

Ranked on average total interactions per episode, Raw was the second most social series, surpassed only by ABC's "The Bachelor." In the process, the red brand topped NBC's "America's Got Talent" and ABC's "American Idol."

Meanwhile, SmackDown LIVE ranked fifth overall, coming in ahead of FX's "American Horror Story: Apocalypse," ABC's "The Bachelorette" and NBC's "This is Us."

- We noted on Friday how Stephanie McMahon tweeted a "Flashback Friday" photo of she and Shane McMahon celebrating Christmas as kids. WWE Hall of Famer "The Million Dollar Man" Ted DiBiase responded to the tweet and referred to Shane and Stephanie as "two handsome young men," apparently mistaking a young Stephanie for a young boy.

DiBiase has since deleted the tweet but you can see a screenshot below: 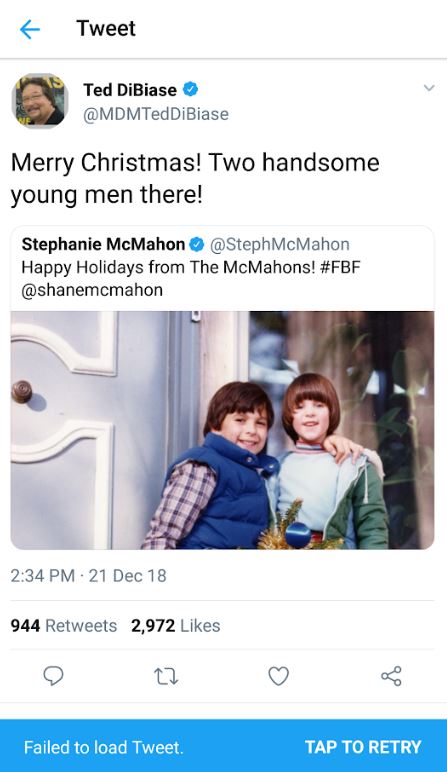