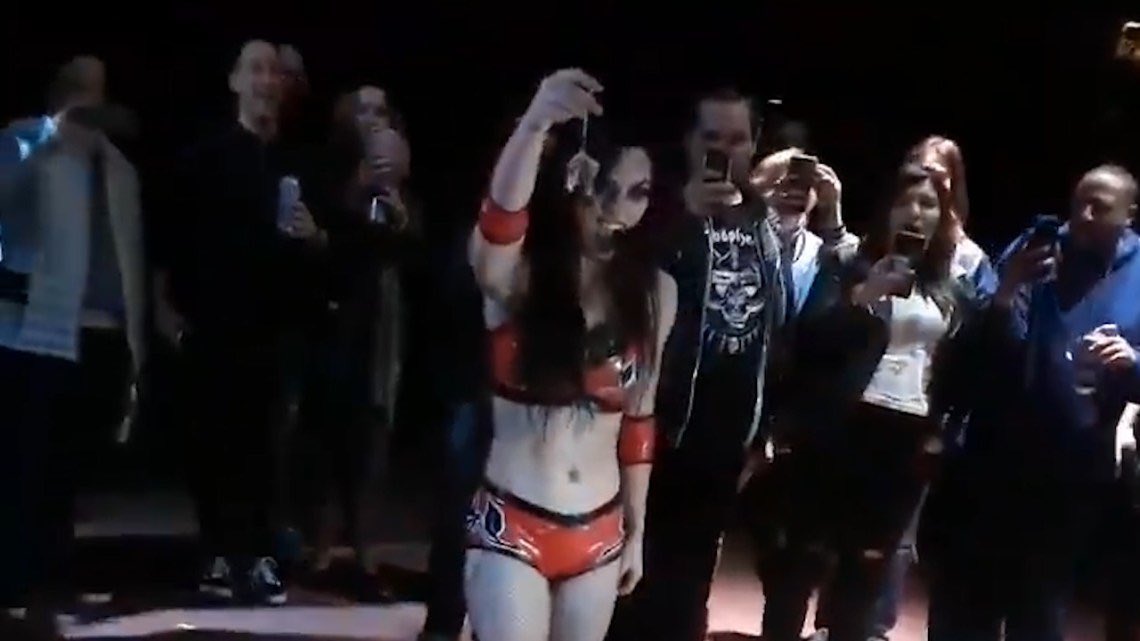 The biggest social media talk in the pro wrestling world this past weekend was not the road to WWE Royal Rumble or the launch of All Elite Wrestling, it was indie women's wrestler Priscilla Kelly and her tampon spot.

For those who missed it, Kelly wrestled an opponent named Tuna at a Suburban Fight Pro Wrestling event near Los Angeles on December 30. During the match, Kelly pulled a bloody tampon from her body and proceeded to shove it down Tuna's mouth. Video from the spot went viral on Twitter this past weekend and the Internet Wrestling Community went wild.

Wrestling stars from WWE Hall of Famer Jim Ross to Impact Hall of Famer Gail Kim blasted the spot while others defended it, including Taz, Colt Cabana and Tommy Dreamer, among others. WWE Producer "Road Dogg" BG James also criticized the spot but later apologized to Kelly for attacking her character as a person, but still disagreeing with the spot. The opinions of wrestling fans were just as split. Mainstream media also picked up on the controversial spot with coverage from outlets such as The New York Post, Fox News, Yahoo News, ESPN, and many others. Kelly defended the spot more than once and wrote on Twitter, "Hey guys. Ya know, it's all fake. 21+ show with a bar. Can't take life so serious all the time. ... A penis is funny and awesome. A vagina is disgusting and trashy. #Equality?"

WWE also got mainstream media attention from the spot as outlets referred to Kelly as a "WWE wrestler" or a former WWE star. The NY Post's headline even said WWE was in an uproar over the spot, referring to the wrestling community in general. Their headline read like this: "WWE in uproar over star forcing tampon down rival's throat."

Mainstream media outlets also made mention of Kelly participating in WWE's Mae Young Classic. She worked the 2018 tournament and lost to Deonna Purrazzo in the first round.

Kelly recently appeared on The Shining Wizards podcast at this link. The show sent us highlights from the interview. Kelly commented on the attention she's received from the spot.

"I'm not new to the attention," she said. "I did a TV show when I was 14 (My Big Fat American Gypsy Wedding), and I received tons of attention and backlash from, and everything in between from that, so I'm kind of preconditioned to this kind of thing. Obviously, this is on a bigger scale than that was, but still kind of the same context."

Kelly also said she didn't expect the negative reaction. She said, "Not at all. I've spoken in previous interviews where I said that when you do these types of shows, you don't know going into it if there are going to be cameras. You don't know if it's going to be posted. You don't know going into these shows, like what to expect, because there are a lot of bar shows that I've done that never see the light of day. So, I didn't expect anything out of it honestly."

Regarding the reactions from Road Dogg, Kelly said she appreciated his apology, but she thinks he should have thought about what he was saying before making the original tweet, and kept his Twitter mouth shut.

"I mean, we get a lot of people saying a lot of things - good, bad, negative, or whatever. I expected to be called disgusting or gross," Kelly said. "I wouldn't have done it if it wouldn't provoke that kind emotion. But I never think it's OK to attack someone personally, to attack their character, or to attack them as a human being. I think that's never OK, no matter the situation. I think if you want to make a comment on your opinion about it being gross, or disgusting, that's fine. But don't attack me as a person when you don't know who I am. He did apologize, and I appreciate that. But I think, ya know, it takes five seconds to look at your tweet before you send it and say 'Hmm, is this kind of cruel? Am I attacking her on a personal level?' And if that's the case, maybe you should just keep your mouth shut."

Many of Kelly's critics commented on how she could forget about any future WWE bookings because they felt the company would want nothing to do with her because of the controversy. Kelly said she's not worried about the spot costing her a future job with WWE.

"Honestly, no. I don't think it blew any chance," she said when asked if she's worried about losing WWE work now. "I mean, if it did, there's plenty of other opportunity in the world of professional wrestling for me. There's plenty of other ways to make money in this business. Would I like to go to WWE? Yeah, I'd love to go to WWE. I'd like to go anywhere. I like making money. I like expanding my horizons. I like showing off my work on very large platforms. But at the same time, no, I don't think it really could have harmed me because I think there's a lot worse things that have happened. Not only on TV, but I think there are a lot worse things that have happened privately in wrestlers' lives. These things are very public, and I think what I did, it's simply a stunt at the end of the day. There's no cruelty behind my actions, and I think that is the most important aspect."

You can listen to the full interview on Episode 406 of The Shining Wizards podcast, available at their website. Kelly's husband, indie star Darby Allin, is also featured in the interview.

For those who missed the spot, you can watch it below: