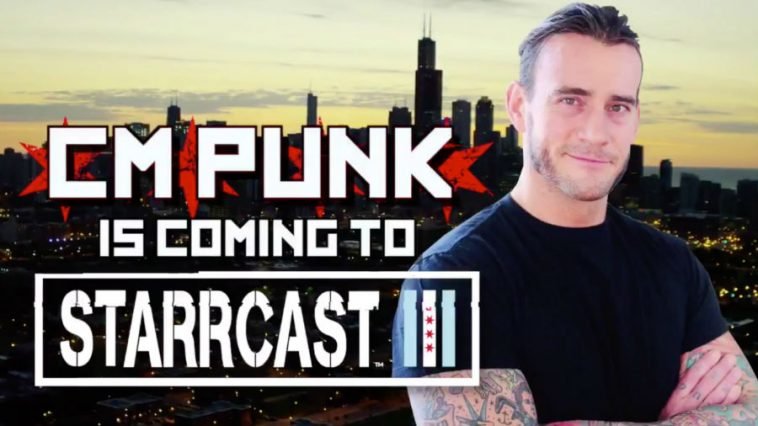 Perhaps just as much as people are looking forward to All Out this weekend, they are also eagerly waiting for Starrcast III. The event will be highlighted by CM Punk making a rare wrestling-related appearance as he will have his own panel at the convention.

The promoter of Starrcast, Conrad Thompson, talked about landing Punk when he took part in a conference call last week.

"I was looking for something as a banner event for Las Vegas and Chicago at the same time. I hung my hat on the Roast of Ric Flair for Vegas but it didn't happen," said Thompson. "I wanted to have a rare appearance there and thought The Undertaker was going to be the guy, but everybody knows WWE pulled him."

Thompson added that for Starrcast III, he wanted to do something no one saw coming and the white whale out there is CM Punk.

"I got his email address and we exchanged a few emails over the course of several months. When it seemed like no deal would come together, very quickly one did. We're thrilled CM Punk is dusting off the mic to join us. I think him being involved in anything wrestling-related has gotten people super interested in Starrcast and we're excited to have him," stated Thompson.

The most obvious question to pose to Punk regards a potential return to wrestling and Thompson said he won't attempt to deflect those questions in any way.

"I'm not gonna combat it. I'm sure when he's doing hundreds of meet-and-greets, every other person is gonna ask that. There's a lot of people who really miss CM Punk and identify with his personabut at the same time they don't wanna just have memories. They wanna have new ones," Thompson said before addressing rumors that Punk will be at All Out.

"My only thing is I wanna clarify since there is speculation out there. This is not a piggyback booking. I did not book CM Punk through AEW. He is not going to be at All Out. Anyone having that expectation is probably gonna be disappointed."

While Punk has been announced for Starrcast, the person hosting his panel has not yet been named. Thompson says that announcement will come shortly.

"I will say it was something debated and discussed and I believe we have filled that spot. I know that piece was very important to CM Punk and I think people are gonna be pleased," revealed Thompson. "The person who is going to do it has done his fair share of homework and it will not just be surface. They will get into the heart of the matter."

Thompson was then asked where he places the Punk booking in terms of hardest things to book.

"If we're saying Starrcast, it's the biggest tent pole event that we've had. The All In press conference I'm always going to go back to because it was such a big deal. The anticipation for that show was on another level and I think this one might be there plus the feather in the cap of getting CM Punk," said Thompson.

"So as far as Starrcast, [getting Punk] is probably it. But if we're considering podcasting, I think Something to Wrestle will probably be what people associate with me the most."

Previous Article
Roman Reigns Wrestles After WWE Tapings, The Revival On Their Alliance With Randy Orton, Next 205
Next Article
Rob Gronkowski Wants "One Crazy Match" In WWE