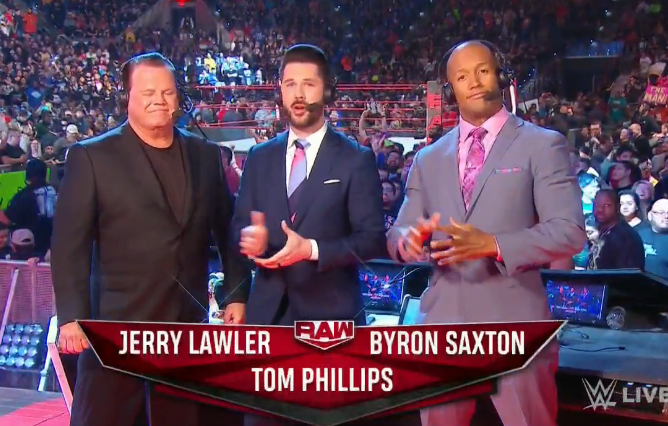 Byron Saxton is now apparently a member of the WWE RAW announce team.

As noted on Sunday, it was reported by @Wrestlevotes that Tom was replacing Vic Joseph on the red brand announce team. Tom and Lawler called the RAW matches at Sunday's Royal Rumble pay-per-view. There had been speculation on WWE adding a third man with Lawler and Phillips.

WWE previously brought Joseph, Lawler and Dio Maddin to the RAW announce team on September 30 as Michael Cole and Corey Graves were sent to SmackDown as a part of the significant fall changes and the move to FOX. Maddin left the RAW announce team in early November after an angle where WWE Champion Brock Lesnar took him out. It was reported that Maddin, formerly known as WWE NXT Superstar Brennan Williams, wanted to return to training for an in-ring career once again. Samoa Joe recently called RAW with Joseph and Lawler as a guest announcer while he waited to be medically cleared, and it was rumored that a third announcer would be put with Lawler and Joseph after Joe returned to the ring, but that never happened. Now Phillips and Saxton have re-joined the team.

Saxton had been calling WWE Main Event episodes with Mickie James since he was pulled from the blue brand back in the fall, replaced with just Cole and Graves.

Stay tuned for updates on the RAW announce team.

Tom Phillips and Byron Saxton are back! #RAW pic.twitter.com/q8UGKhJwIb