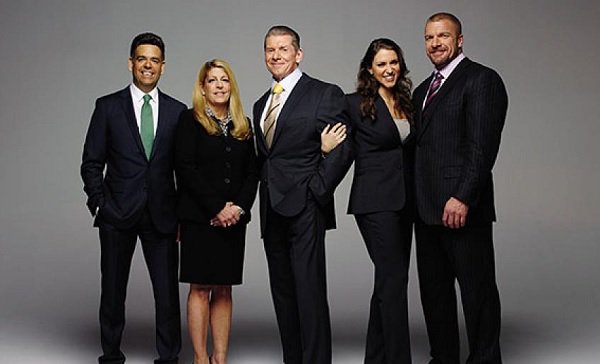 WWE Chairman & CEO Vince McMahon addressed the company's recent "management transition" during today's Q4 & Full-Year 2019 earnings call, specifically commenting on the departures of Co-Presidents George Barrios and Michelle Wilson. During his opening statement, Vince praised Barrios and Wilson for their contributions to the company, but said WWE "won't miss a beat" with them gone.

"As you know, the Board and I recently announced a management transition," Vince said. "This decision did not reflect a change in our strategy. It was made after careful consideration. We remain highly focused on growing the value of our content, furthering international expansion, engaging fans across all platforms. The decision was based on a different view of execution of our areas of focus.

"Over the 10 years [inaudible], supported by a strong management team, George Barrios and Michelle [Wilson], made more than significant contributions to WWE. However, with the change we won't miss a beat. We have a deep team of talented executives committed to our company who are more than capable of executing our strategy. The fundamental sources of our longterm growth, including the ability to capitalize on the rising value of live sports content, remains unchanged and strong."

Vince continued and revealed that they are currently working to change the WWE culture.

"We're currently changing the WWE culture to be more collaborative, more inclusive, developing initiatives, to re-imagine our company and content, bring in new ideas and enhancing our executive team by recruiting global talent," Vince said. "We remain extremely optimistic about our future and longterm growth potential. Quite frankly, I have more confidence than ever, that we're going to exploit all of our opportunities."

WWE officials later took questions from investors during the call and Vince revealed that the company feels confident going into WrestleMania 36 this year. Vince made the comments after being asked what they've done over the past few quarters to improve content and engagement, and if he thinks they need to spend more money on talent to help stimulate engagement. Vince was also asked how much input Paul Heyman and Bruce Prichard have on RAW and SmackDown, but he ignored that question.

"We think that what we've done thus far, in terms of TV ratings and in terms of higher production value, better storylines and allocations of our top talent, at the same time bringing on new talent, is paramount," Vince said. "You can see, again with the ratings, the current ratings not withstanding, what's going to happen in the first quarter, you can see there's growth there. At one time we had a lot of talent that was injured, and we don't have that right now. Again, it just takes a while to be able to put everyone in their right place, right storylines, right talent, and going into WrestleMania we think we have exactly what we want, and going forward as well."

Vince was later asked again about talent costs, and if the rate has gone up or if the impact was there because of revenue increasing. Vince said talent costs have gone up, but that's something they're sort of proud of.

"It's mostly because of revenue increasing. We've always done percentages," Vince said of paying talents. "The more revenue, the more money the make, and conversely, so talent cost has gone up, and we're sort of proud of it."

In regards to the management changes, Vince was also asked about potential changes to how he's spending his time in the short-term, and if he expects that to change over the next few years.

"At the moment I have a few more reports, direct reports," Vince said, likely a reference to people reporting directly to him as opposed to going to Barrios and Wilson. "But going forward that will not be the case in terms of allocating my time. I have pretty broad shoulders, and I can handle a lot."

Another investor asked again about WWE's corporate leadership going forward after the departures of Wilson and Barrios. Vince was asked how he would like to see the executive-level managers end up over the next few years, and how long it might take to get to where he wants the company to be with the transition of leadership.

"Well, I think this is for sure, in terms of changing or re-imagining our culture, the way we do business, it's going to be far more inclusive and quite frankly, that's in our strong management team currently as well, and going forward we're attracting world class individuals to our company. Who wouldn't want to work for WWE? I mean, come on. It's exciting. It won't take us long either, to implement all of that," Vince said.

Vince was asked again about what led to the departures of Barrios and Wilson, and if there were explicit disagreements over strategy, and if the decision was related to execution. Vince said the transition will lead to WWE being more successful.

"A lot of it was execution relation," Vince said of the management transition decision. "A lot of it was the focus as well, and as well as reallocation of resources. Again, looking at the way we do business, it's going to be different and more successful."

Another investor asked Vince who will fill the roles of Barrios and Wilson, and if they're bringing in additional executives or if their current business leaders will be taking on additional responsibilities.

"We're in search now, for exceptional talent, to come in," Vince said. "At the same time, we have huge faith in our current management team."

Vince was asked about his role with the XFL football league twice during the call. One investor asked about concern over Vince's personal investment with the league, and the league potentially getting wrapped up with WWE equity, creating a potential issue. Vince stated that the XFL will have no investment from WWE as it is ran by itself, with around 400 employees keeping the league going. Vince later reiterated that the XFL, which re-launches this weekend, will be totally separate from WWE. WWE's interim Chief Financial Officer Frank Riddick, who hosted the call with Vince, spoke up and stressed that there are no plans for the XFL to be put back into WWE as it is a completely independent entity.