- Above are the top 10 moments from last night's WWE NXT episode on the USA Network. Below are highlights from today's NXT UK episode on the WWE Network. The show featured Dave Mastiff vs. NXT UK Champion WALTER, Alexander Wolfe vs. Travis Banks, Aoife Valkyrie vs. Isla Dawn, Ridge Holland vs. Saxon Huxley, and more. You can click here for our detailed report on this week's NXT episode.

- It looks like Nikki Cross will be returning to WWE SmackDown on FOX this week to co-host "A Moment of Bliss" with Alexa Bliss as they welcome 2020 WWE Hall of Famers the nWo (Scott Hall, Kevin Nash, Sean Waltman) as their guests. As seen below, WWE updated the graphic for the segment this evening and added Cross to it. The original graphic only had Bliss and the nWo members.

We noted a few weeks back how Cross was pulled from the "A Moment of Bliss" segment with 2020 WWE Hall of Famers The Bella Twins. Husband Killian Dain later revealed that he had been taking care of her all week at home because she was really sick. 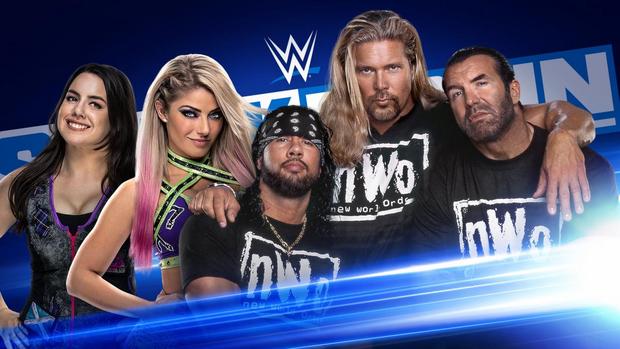 - It looks like WWE Universal Champion Bill Goldberg is set to return to "NCIS: Los Angeles" on an upcoming episode. WWE posted a preview clip from the show below. The WWE Hall of Famer first appeared on "NCIS: LA" in 2018 as Department of Justice Special Agent Lance Hamilton, and then returned in the role for two more episodes in 2019.

#UniversalChampion @Goldberg guest stars on @NCISLA as DOJ Agent Lance Hamilton, who is trying to track down a missing undercover agent.#NCISLAhttps://t.co/2HcvynXuTo

Previous Article
AEW Announces The Death Triangle Vs. Joey Janela And Private Party For Next Week
Next Article
Bully Ray Warns Wrestlers Over Jake Roberts And The DDT, DDP Praises Jake For His AEW Dynamite Debut