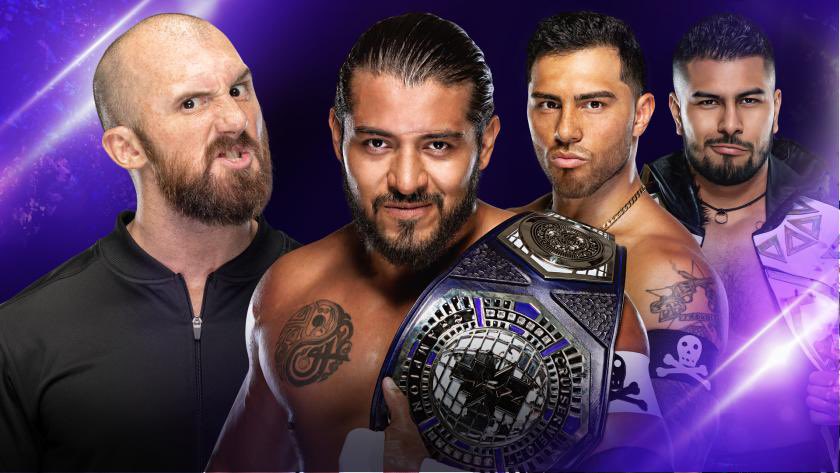 Welcome to Wrestling Inc's WWE 205 Live recap! Tonight's action-packed show will take place right after Friday Night SmackDown at 10 PM EST on the WWE Network. Be sure to chime in on your thoughts about tonight's show in the comments section below. Additionally, share our live coverage through social media. Make sure to click the REFRESH button to continue to get the most current up to date coverage.

Byron Saxton and Corey Graves welcome us to another edition of 205 Live from the Performance Center. Mansoor makes his way to the ring for our opening contest. He'll be taking on Tehuti Miles in singles-action.

Miles lands a leg kick to open things up. A second and Mansoor has to adjust...he picks the ankle and takes Miles down but Miles powers up and grabs a headlock to slow the pace. He runs through Mansoor with a shoulder block...Mansoor picks the ankle again and applies a headlock of his own....Miles bounces him off the ropes and trips Mansoor coming off the ropes. Mansoor tries to mount a comeback with a series of arm-drags but Miles once again uses his power to regain the advantage. Mansoor pops up and lariats Miles over the top rope. Miles shakes it off and sweeps the leg from ringside. He whiplashes Mansoor into the ropes, then proceeds to stomp him down in the corner. Neckbreaker from Miles for a nearfall. He picks Mansoor up and clubs him across the back. Another neckbreaker...another close two count. Miles keeps the pressure on Mansoor's neck with a rear chinlock. Fans try to rally Mansoor back into the bout...he manages to dump Miles to the outside. Miles aggressively comes back...Mansoor cradles him...Miles just kicks out. Mansoor starts stringing together offense including an atomic drop and a spinebuster. Sling-shot neckbreaker from the apron...Miles is in trouble...Mansoor drags him into position and climbs to the top...moonsault misses...Miles follows up with a flapjack. He goes for a gut-wrench powerbomb...Mansoor slides to the back and connects with a modified spinning slam for the win.

.@KSAMANNY kicks off the action RIGHT NOW on #205Live! pic.twitter.com/MyV3AKu3K2

Footage of NXT Great American Bash is shown, where NXT Cruiserweight champion Santos Escobar picked up the win for Legado Del Fantasma over Drake Maverick and Breezango with the Phantom Driver. Commentary tells us that the champ will be taking on Oney Lorcan in his 205 Live debut next.

Commercial for Extreme Rules, followed by an advertisement for WWE Shop.

Main event time. Oney Lorcan is out first, however he is not accompanied by his normal tag partner Danny Burch. Escobar is out next along with Raul Mendoza and Joaquin Wilde (Legado Del Fantasma). Here we go.

Tie-up...neither man is able to gain the advantage so they reset. Second tie-up...Escobar with a quick arm-drag. Lorcan presses him off and chops the champ hard across the chest...Escobar barely flinches. He brings Lorcan down with a standing Kimura...Lorcan manages to escape and create separation. Escobar brings Lorcan down and goes for a lateral press pin...Lorcan kicks out. Escobar continues going after Lorcan's injured arm...Lorcan school-boys Escobar for a quick nearfall. Escobar shakes it off and goes for a variety of submissions to wear Lorcan down. Lorcan fires off a chop with his good arm but the champ traps him in a headlock, then hits a snap-suplex with the bad arm tucked behind. Every time Lorcan lands a bit of offense Escobar battles him off. Lorcan does hit a running uppercut as Escobar climbed to the top but Escobar rakes the arm of the ropes, then whips it into the ringpost. Commentary asks whether or not the referee should stop the match after the amount of damage that has been done to Lorcan's arm. Lorcan eventually hulks up and drops the champ with another running uppercut. He connects with his signature running blockbuster but his arm keeps him from making the cover. Escobar drives the knees into the arm again...he follows up with the Phantom Driver for the easy victory.

There is a 0% chance that @ONEYLORCAN is gonna quit! #205Live pic.twitter.com/NRE3bP6QJ9

Escobar, Mendoza, and Wilde stand over Lorcan who lays unconscious after his bout with the champion. Saxton asks what this will mean for the future of 205 Live.

Previous Article
Matt Riddle Vs. AJ Styles For The WWE Intercontinental Title Set For Next Week's SmackDown
Next Article
FTR On The Biggest Difference Between Tony Khan And Vince McMahon